The Winds of Change on... Steroids! Protecting Your Emotional and Physical Health During Covid-19 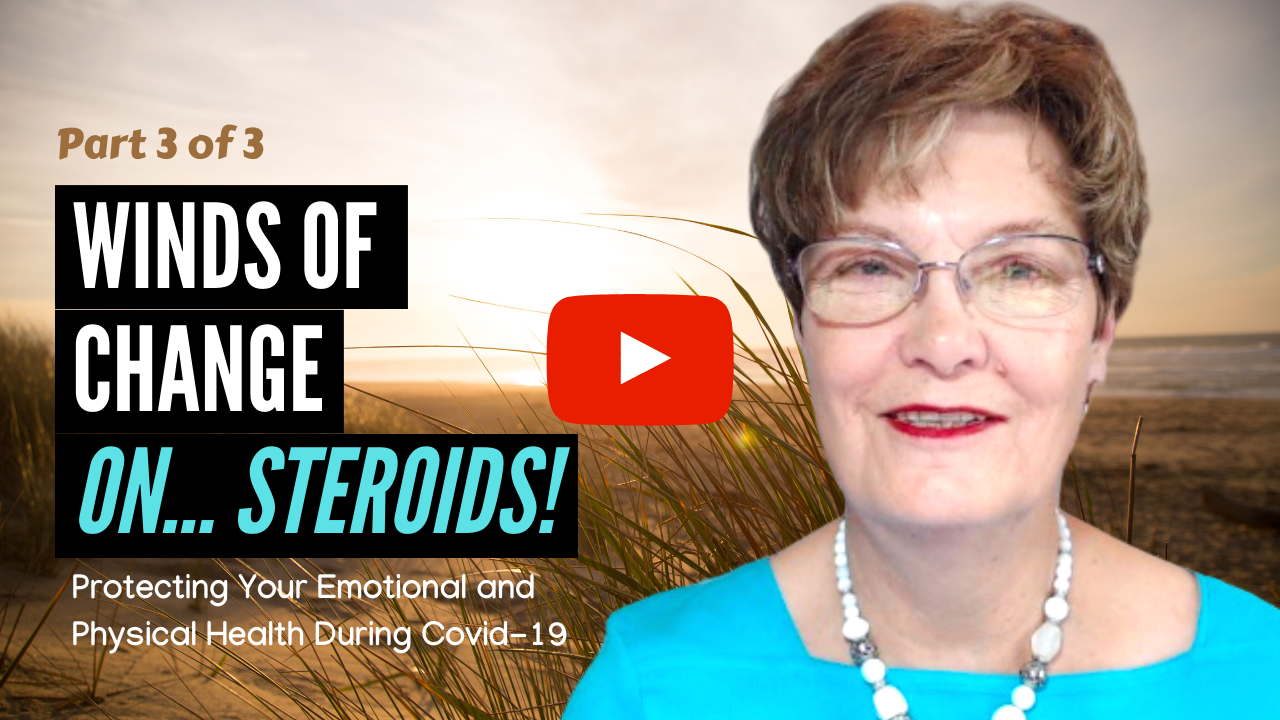 Hello everybody, this is Linda Frazee,

I want to talk to you today about Change, in part 3 of my series.

Little did I know that when I planned three different elements of change, that the third one would be when we were in change on steroids!

So here we are in the world where everything has changed.

So what do you do about that

Well, you might have noticed that there's like three basic reactions that people have to this. The first one is in 'denial'. This is not happening. I don't have to do anything about it. I don't want to social distance! They get irritated about it and they deny. You might have had some of that in the early stages.

The second one is sort of 'fascination' like, 'Well, isn't this interesting?!' This is a historic time in history and I'm just fascinated with what's going on. And isn't it crazy that everybody is out there buying toilet paper? So that's number two.

And then the third one is 'fear'. Now, I would imagine that everybody listening here and watching me today has had some of all three of those - and sometimes at the same time! So it can get confusing! So what do you do when this is coming on? What can you do? The 'collective unconscious', all those thoughts around the world of fear, are like a big heavy rain cloud. It's around the world right now and it's so heavy. It's so seeded with fear that it's like rain - and raining fear! So what you have to have as an umbrella so that you're not just completely doused by not only your own fear from inside, but everybody else's as well! So here's some material that I believe your umbrella is made of.

The very first one is understanding that this is not just all about what you're feeling, it's really a worldwide effect and that you have to protect yourself. So of course you have to follow the guidelines and you have to take some appropriate actions. If you're worried about your money, try to talk to your lenders (if you have lenders) about deferment. If you're worried about the stock market, don't keep looking at your balance so that you scare yourself!

It's really important to notice where you're putting your own personal energy because whatever you focus on expands, we all know that. So don't be in denial. Look at something, let yourself know, then do the positive things and then turn your head. So that's number one.

Number two is you want to move your body and there's a lot of exercise videos on TV and people offering things, taking walks - you can still walk around, at least here in Arizona, you can walk in some of the places you can usually walk. They don't want you on the streets of New York, you may have to go up and down your stairwell or something. If you're in an apartment in New York, or wherever you are, try to move your body some because you know when you're not moving your body, fear tends to just coalesce. So that's part of what your umbrella is made up as well.

Stay engaged with others, either by phone calls or by zoom meetings, Microsoft Teams, Google Hangouts, or whatever is available. However you can do it so that you don't feel all alone. You know, we're all in this together. It isn't just about you having this experience. Everybody is having it at the same time. So that's about engagement with others.

The other thing that is really important is to make some progress in your life. It's real easy to get lethargic, especially if you don't have that umbrella. Because if you don't have the umbrella, you're receiving all this heavy energy of everybody else's - and you can get very lethargic. So look at something around the house that's been bothering you that you didn't have time to fix, or before when you didn't have any inclination. Maybe start minor, you know, start with a baby step. So let's say use a picture that you've walked by all the time. It was crooked. Well, go and straighten it. It sounds silly, but little tiny things that make you think, Oh, well gee, maybe I could do something else. I wouldn't suggest that you start huge projects unless you're going to break them down into little bits so that you can get them done.

Also, in order to stay grounded, you need to be doing meditation, a spiritual reading, a prayer, or whatever that is for you, some quiet time by yourself.

The other thing is to 'bless' this time and accept this time as a gift. There's probably no one I know who hasn't wanted some extra time to do what they want to do.

So in all of this, there are many things you can do to keep up that umbrella, to keep yourself from feeling overwhelmed by other people's irritations and fears and staying grounded with yourself. In closing, I just want to remind you that old saying that my mother gave me many years ago, which 'this too shall pass'. And even though this is a long passing, it will pass! I guarantee it!

If you'd like to go to my website - LindaFrazee.com - there are many things that are there that you can look up. Check out my free videos on the Enneagram and many other subjects that can help you throughout this time.

Have a good day.

Free 5-Video Series: What is the Enneagram Anyway?

I am delighted to introduce you to a personality system that goes beyond behavior.  Discover what is really running the show and how to harness your motivation for more success and satisfaction in every area of your life!

I am looking forward to staying connected. I respect your privacy and will never share your information. If you prefer to call me direct, please call 602-686-6313.